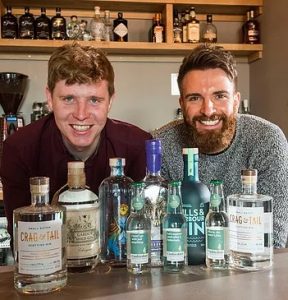 Gregor Niall Maclean, Director at Huffman’s, chats with Lost Loch Spirits about Sweetdram Escubac, Walt Disney and dodgy waiters
Huffman Prairie is the name of the grounds where the Wright Brothers, the pioneers of flight designed and built the first practical aircraft. In the summer of 2016, Ramone Robertson and Gregor Maclean created Huffman’s – a premium drinks distributor.
Based in Dundee Huffman’s sell independent drinks products to the on and off trade all over the UK. They started working with Lost Loch in November 2017 when they listed Haroosh and Murmichan and were the first to list eeNoo.
We caught up with Gregor, Director at Huffman’s, for a wee dram.

What does your job involve?
All aspects of the business from ordering, selecting new products, generating new customers.
Tell us something interesting about your work?
We started out with 7 brands and also offered food. We now have over 550 products…and no food! We got rid of the food side in August 2017.
How did you get into doing what you do?
I started working for Bacardi Brown Forman in 2013 representing Bacardi, JD, Grey Goose, Bombay Sapphire, Patron and a few other big brands in Dundee & St Andrews. By going to farm shops and farmers markets I thought there was opportunity to work with smaller brands.
What’s your favourite cocktail?
Can’t go wrong with a good quality Daquiri. Best one I’ve ever had was with Appleton rum in Draffens, Dundee.
What’s the most unusual spirit you’ve tasted?
Sweetdram Escubac is up there. Got to mention Murmichan as well. I still tell people that despite its high ABV there was so much flavour.
What’s your first experience trying gin?
Mum’s G&T when I was probably 10. Am I allowed to say that?
What’s your favourite joke involving drink?
Got hit in the head with a drink once. It was OK though; it was a soft drink. That’s all I’ve got…
What’s your party trick?
Give me the first couple of seconds of any song and I can name the song. Most of the time…
If you could buy a drink for anyone who would it be?
Walt Disney. I would like to think he’d either have a scotch Whisky neat or a milkshake.
What’s the funniest thing that has ever happened to you in a bar?
Mentioned this in the office because couldn’t think of something so Ramone had one. He was at a bar in Edinburgh and they ordered some cocktails and the waiter knocked them over and set the table on fire.