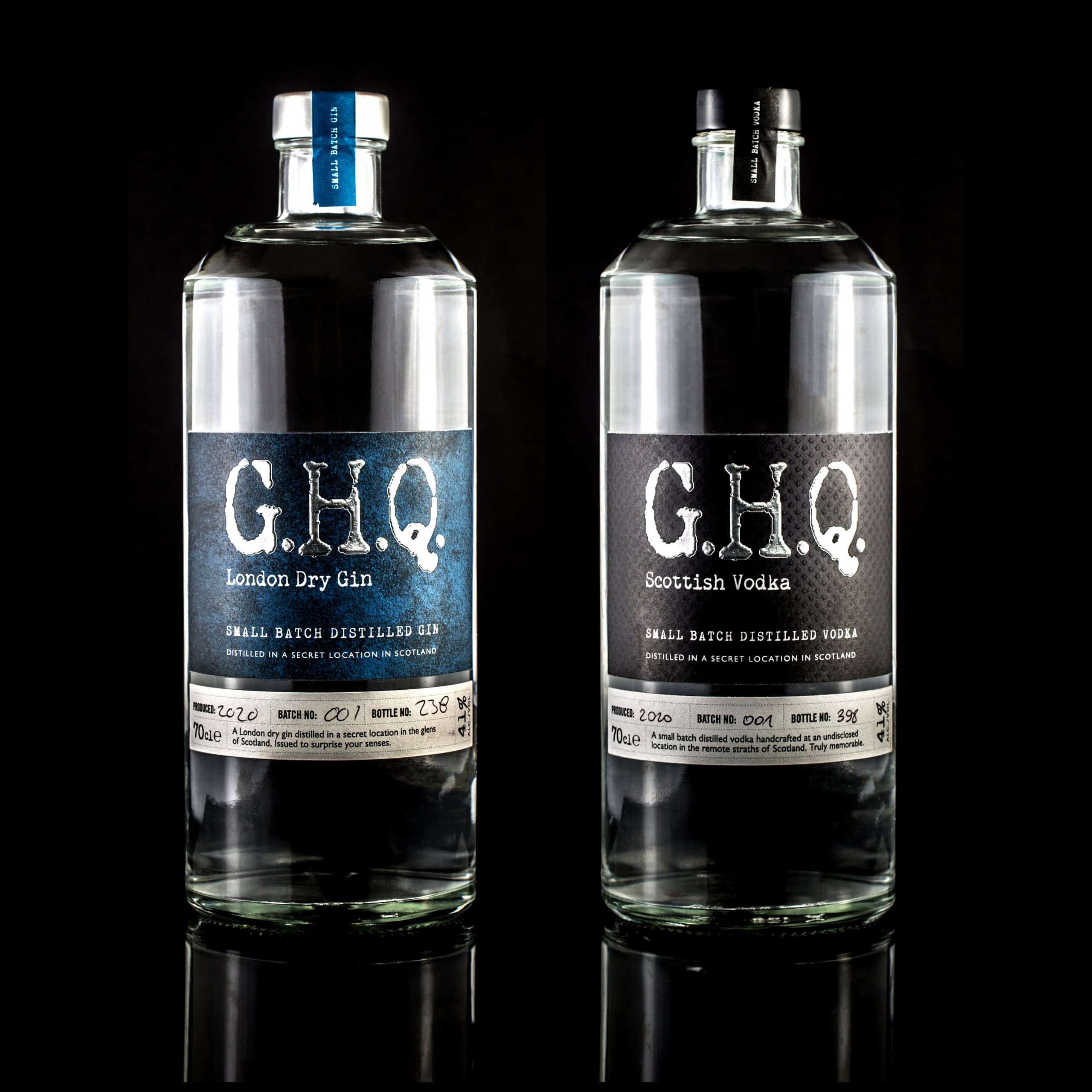 James McNeill, Owner of G.H.Q. Spirits, chats with Lost Loch Spirits about The Prosper Cocktail, Carl Sagan and how we ended up working together

If you’re into vodka and gin, and its likely you are, then its also likely you would have seen these double agents from G.H.Q. Spirits making waves (or secretive nods).

Where does the name G.H.Q. Spirits come from?

Coded twist on G.C.H.Q. – Gin Headquarters for those in the know!

We love the brand’s top-agent secretiveness. Do you have a favourite secret agent?

The G.H.Q Prosper Cocktail sounds tasty. Can you tell us about its inspiration?
INGREDIENTS • 35ml G.H.Q. Gin • 15ml G.H.Q. Vodka • 20ml Lillet Blanc • 4 dashes orange bitters • Top with Soda
Roll over ice and serve on the rocks in a highball glass. Garnish with some of those amazing flowers from your garden.
Andree Borrel was a secret agent fighting for the allies during WW2. Code name: Prosper. She was deadly as she was cunning. Proof of this fact comes when she was asked how she would dispatch a nazi, she replied calmly “I’d thrust a pencil through his eye, and he’d deserve it”. Cocktail Mixologists Nathaniel and Breagha from Draffens in Dundee created this masterpiece.
If you could share a vodka tipple with anyone in the world (alive or dead) who would it be with?
Carl Sagan, especially with the social media frenzy of conspiracy theories – His book “The Demon-haunted World” is very sobering, so you would need a stiff vodka to chew the fat over it with Carl.
Come on then… shaken or stirred?
Stirred – too much energy in shaken and I like the flavours to languor over my taste buds before that rush of warmth flows through my body.
How did you get into doing what you do?
Blimey, my background is Architecture but I deviated away from that 20 years ago and moved into property and retail and then 16 years ago I went into the nightclub industry as a trouble shooter. I then developed Pulse a 30k square foot events space on the Southbank of London in 2010 and we operated that until 2019, unfortunately the site had been purchased by high end residential development company to build over 600 luxury apartments and two hotels. I was on the verge of signing a deal for a new space in the city and was calling it G.H.Q. a new Gin Head Quarters in the city when the pandemic broke out. I had attended a couple of gin distilling courses and was in talks with a couple of distillers about creating a white label for me back in 2019. So I flipped the business plan on its head and went full steam with G.H.Q. Spirits once I had all my trademarks signed off.
How did you hear about Lost Loch?
My sister moved to Strathdon 5 years ago to set up a Sweet Donside luxury cabins. The Cairngorms are magical and quintessentially all that we hold dear to us of Scotland, marry that with some of the purest water in the world narrowed down my search to a specific area. Lost Loch already had a good reputation for producing their own award-winning spirits. So they ticked all the boxes for me. Also – with the owners background in engineering their attention to detail was exact.
Can you tell us a bit about how you worked together?
Well – it was interesting during lockdowns. I told Peter I was after a classic London dry Gin with a twist, and that’s exactly what he has produced.
We did a run of 12 blends and once they had rested I did virtual tasting sessions with a number of friends who are all big gin drinkers. That was a laugh in itself as I sat and watched them slowly become inebriated, I soon discovered that we had to do the taste and spit or there was no way I was going to get a comprehensive judgment from them.
Same applied for the Vodka, although this was new territory for me as I’m not a Vodka drinker. Luckily I’ve got a lot of friends who love their vodka!! And I have to say Peter has created an outstanding Vodka blend based on an old Russian recipe.
The whole process of working with Rich and Peter has been very smooth and easy. Transparency in what they do and how the market works is the key to their operation. You know exactly what you are going into, what is required and they helped me every step of the way. There’s a lot of pitfalls and landmines in going into this business if you don’t know where to look. I have been very fortunate teaming up with Lost Loch!