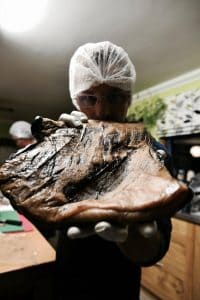 Mark Reynolds, Top Baconeer – Head of Ideas & Drive Train at Piggery Smokery, chats with Lost Loch Spirits about epic bacon, mezcal (and the worm) and American biker gangs
If you’re partial to a bacon sarnie, you really must try Piggery-Smokery. They create bespoke, artisan & good auld fashioned, modern bacons for hard working folks.
They’re the team behind the mouth-watering “Toosh the Haroosh” back bacon. Piggery Smokery Epic bacon massaged with Lost Loch Spirits’ Haroosh. Really, its as good as it sounds! G’wan treat yourself!
We caught up with Mark for a wee dram.
What does your job involve?
Turning awesome local pork into award winning good auld fashioned, modern bacon, meeting lots of passionates and working well-hard.
Tell us something interesting about your work?
Making bacon has opened loads of doors for me. I love the fact that I have no real rules of engagement for dealing with the public; I can be as wild and mad or calm and collected as I like – I can be me.
Bacon has also got me loads of other work (in oil to Russia) where my last 5 interviews have consisted of talking about bacon for the first 40-minutes and then a 5-minute wrap up of the job. Folks find it fascinating and I like making a sale, which I find is quite easy but only because I know what I sell is top banana and the best you can buy.
How did you get into doing what you do?
I hate eating rubbish Peter. Bacon from shops is rubbish. Most stuff in supermarkets is rubbish – like peppers or aubergines, avocados, mangoes – they generally taste of nothing. It’s all forced and out of season and stuff. I hate the fact that big major food suppliers think that we want to eat this rubbish. They have it all sewn up controlling farmers, setting prices and manipulating our choices for shareholder profits. Their marketing creates a fake demand like ‘eat me, keep me’ since when does anything you keep actually ripen and when it changes colour why does it taste rank?
We buy exactly the same stuff in vast quantities because it has become easier to mass produce as quickly as possible. That’s why it’s covered in waxes and pesticides. It’s why animal welfare, whilst probably better in UK, is still pretty poor and even worse in other parts of the world. Its why pigs are often bred quickly and forced to grow at enormous rates – they have a shit life and the product is crap. You can’t make great stuff from rank stuff that’s why glucose syrup and salt and water are added. Folks like Hugh Fearnley-Whittingstall and Jamie Oliver are right, there is other stuff out there to eat and it should be in season cos’ that’s how its developed, over millennia, to achieve a proper thing. Commercial Bananas, what the hell do they really taste of?
Try listening to ‘How to Start a Food Revolution: The Food Adventures of Claus Meyer’ https://www.bbc.co.uk/sounds/play/m00046pw
What’s your favourite cocktail?
I actually like gin and tonic but I can only have a couple and then I’m on beer.
What’s the most unusual spirit you’ve tasted?
Mezcal and the worm – turned me into a right weirdo.
What’s your first experience trying gin?
I went to Port Elliot Festival in Plymouth and we couldn’t smuggle all the beer we wanted into the place. However we made up 2 bottles of gin and tonic and got that in. It was a roasting hot day and supping each of our 2 litres of this stuff made us laugh – the kids didn’t find it that funny though.
What’s your favourite joke involving drink?
A snail is attacked by 2 slugs outside a pub. The cops arrive and ask the snail “So Brian, what happened?” Brian sobbed and whispered “I dunno officer, it was over so quickly.
What’s your party trick?
I can turn a tea towel into a chicken.
If you could buy a drink for anyone who would it be?
I reckon it would be Uncle Charles Christopher Vincent – he nearly made it through the entire first world war on the Arras battlefield only to not be found in the spring of 1918 after some attack. I’d like to buy him a drink and tell him we remember him. If my Dad could be there then that would be pretty cool too, maybe a Roman ship builder or Ernest Hemingway, or perhaps the guy who invented radio, Marilyn Monroe – I’d buy her loads of drinks… ha-ha.
What’s the funniest thing that has ever happened to you in a bar?
Not sure I can tell you that but I ended up in jail in Myrtle Beach, South Carolina wearing a kilt once so I’ll give you this anecdote instead on the same trip.
I bought a Harley in America and toured with a great Uni pal of mine for nearly a year. As it turned out we travelled virtually in the footsteps of Jack Kerouac without knowing it. We met up with a pretty good biker gang some of whom played in a bluegrass band and they were really popular. We all went to Tattoo Dees for drinks one evening on our bikes. This is where the Mezcal comes in from the question above. It turned me into superman and I managed to arm wrestle, very successfully, loads of big muscled long hairs who couldn’t pin me to the ground after I got really excited at winning. I had sore ribs for a couple of days afterwards cos’ I couldn’t stop laughing as I bench pressed them; “Goddam! This little guy’s a strong man; whoa”. I found it funny at least.